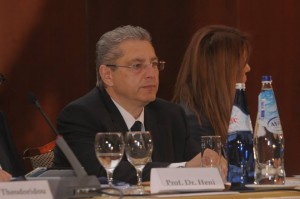 "Doing Business in Germany" was the title of the event held in Thessaloniki and hosted by the German consulting firm WIG GmbH in cooperation with the law firm Kosmidis & Partners KPAG and certified auditors Wirthschaftstreuhand GmbH. The event addressed issues concerning the Greek extraversion and entrepreneurship in Germany by various specialists such as lawyers, auditors, human resources and subsidies consultants and real estate agents.

The event, which lasted approximately six hours, was attended by the Consul of Germany Mr. Dr. Ingo von Voss, who saluted the guests, did mention that there are better days to come for Greece following the latest developments in economy and congratulated the above on taking the initiative to organize such an event . The event was attended by representatives of companies and entrepreneurs operating in various sectors of the economy such as food and beverage production , civil engineering , real estate , renewable energy sources etc. The interest of the guests was strong, showing a rising trend of Greek entrepreneurs to invest abroad, creating a new beginning for the Greek entrepreneurship, aiming to create and raise the value of Greek brands in other countries . The event concluded with questions from guests concerning, in particular, issues on the tax treatment of business in Germany and the practical possibilities of subsidies for Greek enterprises in Germany . "
Katergorien: News in English
Keywords: Business Germany
Kommentare: Keine Kommentare | Kommentar schreiben »

Publiziert am 15.April.2014 von Abraam Kosmidis
On Friday, the 11th April 2014 the German consulting company Wig GmbH and its partners KPAG Kosmidis & Partners Law Firm and Wirtschaftstreuhand GmbH organized the event "Doing Business in Germany" at Hyatt hotel in Thessaloniki. The event was aimed at informing attendants about investment opportunities in Germany and presenting the legal and tax implications of doing business in this land. Several lawyers, tax advisors, CPAs and other consultants presented the current situation in Germany, the company and tax law in force from a practical point of view, the current opportunities in the German real estate market as well as the subsidies offered by the German state to foreign investors. The event was attended by businessmen and entrepreneurs from several sectors and lasted approx. 6 hours.
Gesamten Artikel lesen »
Katergorien: News in English
Keywords: Business Germany, News
Kommentare: Keine Kommentare | Kommentar schreiben »